SMARTWEARABLE subproject aims to develop and experiment a new smart robot system for lower-limb rehabilitation. The solution will be based on the Exo-H2 rigid actuator plus a control and monitoring system that includes rehabilitation exercises.

This project has indirectly received funding from the European Union’s Horizon 2020 research and innovation programme, via an Open Call issued and executed under project DIATOMIC (grant agreement No 761809)

ColRobot combines cutting-edge European robot technology and end-user requirements for assembly processes to create an integrated system for collaborative robotics in which a mobile manipulator acts as a “third hand” by delivering kits, tools, parts, and holding work pieces while the operator works on it. Humans will cognitively and physically interact with ColRobot robots using gestures, touch commands and demonstrations.

The main objective of the project is to improve existing wearable robotic exoskeletons exploiting dynamic sensory-motor interactions and developing cognitive capabilities that can lead to symbiotic gait behavior in the interaction of a human with a wearable robot.

The major drawbacks of existing walking bipeds are related to stability, energy consumption, and robustness to unknown disturbances. The goal of H2R project is to demonstrate human-like gait and posture in a controlled compliant biped robot as a result of a combination of the most relevant motor control and cognitive mechanisms found in humans.

ABC project has developed new ways of communication for children with diskinetic cerebral palsy. The core outcome of the project is a communicator integrating health and emotion capabilities with an open interface which can be controlled by different in approaches. Among the different input devices tested within the framework of the project, the following ones deserves to be mention: BCI paradigms, EMG signal and head posture measured with IMUs. FP7-ICT-2011-7-287774 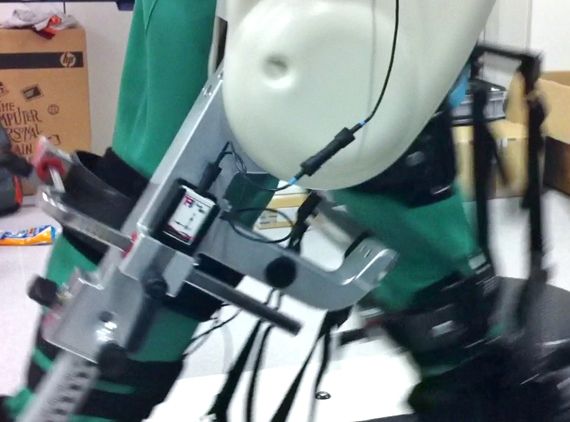 Brain-Neural Computer Interaction for Evaluation and Testing of Physical Therapies in Stroke Rehabilitation of Gait Disorders.
Dates: From 20010-02-01 to 2013-01-31

The main goal of BETTER is to improve physical rehabilitation therapies of gait disorders in stroke patients based on BNCI assistive technologies, producing improved systems, providing guidelines for improving future systems, and developing benchmarking and evaluation tools. The project will validate, technically, functionally and clinically, the concept of improving stroke rehabilitation with wearable exoskeletons and robotic gait trainers based on a TOP-DOWN approach. FP7-2009-7.2 – STREP – Contract Number: 247935

An ambulatory BCI-driven tremor suppression system based on functional electrical stimulation.
Dates: From 2008-09-01 to 2011-08-31

The main objective of the project is to validate, technically, functionally and clinically, the concept of mechanically suppressing tremor through selective Functional Electrical Stimulation (FES) based on a (Brain-to-Computer Interaction) BCI-driven detection of involuntary (tremor) motor activity. TREMOR proposes a multimodal BCI in which the main goal is identifying, characterizing and tracking involuntary motor bioelectrical activity as a command to trigger a biomechanical suppression of tremor. FP7-ICT-2007-2-224051

Experimental development of a specific system (VR System with stereoscopic vision and tremor filters) for rehabilitation of people with special necessities. (patients with cognitive diseases in the motor function)
Agreement TSI – 020100 – 2010 – 1117

This website uses cookies to improve your experience. We'll assume you're ok with this, but you can opt-out if you wish.
Política de privacidad y cookies
Necessary Always Enabled